Yoga  a physical, mental and spiritual practice having its origin over 6000 years ago in India, aims to integrate the body and the mind. The word yoga means unity or oneness and is derived from the word “yuj “which means” to join”. The unity or joining is described in spiritual terms as the union of the individual consciousness with the universal consciousness and also balancing and harmonising the body, mind and soul. This is done through the practise of asana, pranayama, mudra, bandha satkarma and meditation.

Yoga is the science of right living and, as such, is intended to be incorporated in daily life. It works on all aspects of the person; the physical, vital, mental emotional, psychic and spiritual. Yoga is one of the six orthodox systems of Indian philosophy. Yoga was developed as a part of tantric civilisation which existed in India and all part of the world more than 6,000 years ago. In archaeological excavations made in the Indus valley at Harappa and Mohenjo-Daro, many statues have been found depicting deities resembling Lord SIVA and PARVATHY performing various asana and practicing meditation. According to mythical tradition, SIVA is said to be the founder of yoga and PARVATHY his first disciple.

Yoga  and Siddha System of Medicine

Origin of siddha and yoga  is inseparably same. It  traced to theological sources belonging to Shaiva tradition.  According to the tradition, Lord Shiva conveyed the knowledge of medicine and yoga to his wife Parvathy.  The knowledge was passed from her to Nandi and finally it was given to the Siddhars.  The word Siddha denotes one who has achieved some extraordinary powers(Siddhi).  This achievement was related to discipline of mind and its superiority over body, and was accomplished through both yoga and medicine.  Thus Siddhars (practitioners of Siddha) became the symbols of psychosomatic perfection and so the Siddha medicine became a combination medicine and yoga.Siddhar Thirumoolar and Pathanjali siddhar who lived in the  3rd century BC .   Pathanjali siddhar is consider as the father of yoga and Siddhar Thirumoolar is consider  as the father of therapeutic yoga.  Tirumanthiram  is  the  seminal text of saiva siddhadha ,yoga and medicine in Tamil.It dealing with science of life.It  is the outcome of Tirumoolar’s love and desire that mankind should share the fruits of his valuable  experience attained  during his Yoga practice .It is divided into nine thantras consisting of 3000  verses deals with the sivisam,prolongation of life by the control of breathing, medicine,yoga etc . The third thantra of thirumanthiram  deals with Ashtanga yoga, importance of ashtanga yoga,the great eight siddhis,measurement of life span, pariyanga yoga ,way to kaya siddhi,kala chakra,breath rhythm in days of the week, kecheri yoga,amuri dharana , Chandra yoga. There were so many texts regarding yoga by many siddhars,which were scattered in different texts. In Siddha  medicine yoga  comes under the kaya kalpa .Kaya kalpa means those which prevent graying of hairs , wrinkling of skin, ageing , senile changes, and other diseases for promoting  longevity  with complete  freedom from illness. Siddhars teaches yoga as a rejuvenation medicine along with natural remedies and those choose this path will get health ,happiness and longevity.

Thirumoolar siddha Yoga
Yoga is a timeless practical science evolved over thousands of years dealing with the physical, moral, mental and spiritual well being of man as a whole. Yoga is an ancient art based on a harmonizing system of development for the body, mind and spirit. Curative effect of  yoga over the pathological condition of the physical body  is clearly explained  in Sage Thirumoolar’s “THIRUMANTHIRAM”. Sage Thirumoolar  is one of the eighteen Siddhars who are considered as the founders of ancient Siddha system of medicine. He is also considering as the Father of Therapeutic Yoga. He explained Ashtanga yoga in the Tamil seminal text of Siva Siddha and therapeutic  yoga “Thirumanthiram”.

Meaning of above shloka is

Dharana, Dhyana and Samathi to triumph

These eight are the steely limbs of YOGA 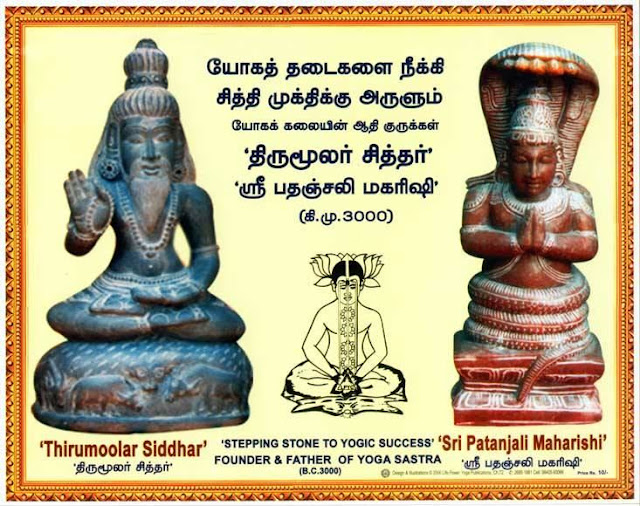